Blessing of the Light at St John’s, Dumfries

“Many churches, monasteries and the like hold Lucernarium services, in the evening,” comments the rector, the Rev Janice Aiton. “It’s not something we commonly do at St John’s, but we were celebrating a special occasion: the first opportunity to use fully our wonderful new lighting system, the works for which were completed in the latter part of November. The old lighting had been in place in the church some 25 or more years and, though I understand it was better than what it replaced, it had gone well past its sell-by date. More and more components were failing; the fittings were obsolete, so we couldn’t obtain replacement parts and, as you will appreciate, many of the lights are very high up and require scaffolding to access them. We were fast reaching a stage where it was becoming difficult to see to read hymn books and the like, even with everything on.” 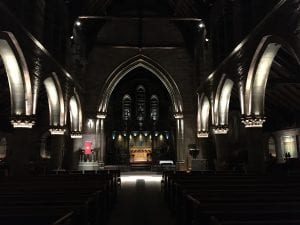 “We realised we needed to do something pretty urgently,” adds Peter Johnson, St John’s sexton, who is in charge of maintenance. “We went and looked at a number of other churches, though, more often than not, it helped to clarify our minds as to what we didn’t want. However, we were completely blown away when we visited St Paul’s Cathedral, Dundee, which had recently had a complete lighting redesign. We hoped we might be able to have something like that, but I don’t think any of us thought we would be able to raise sufficient money to do so.”

In the end, a presentation was made to the congregation, by Peter, by David Kerr, the pastoral administrator, and by the lighting designer and electrical contractor themselves. “They had mocked up a small area of the church, to show what their proposed scheme would look like,” continues David Kerr. The members of the congregation who attended the presentation were stunned by how beautiful it was, so even when the price was mentioned, they scarcely even blinked!”

A few fundraising events were held, and more planned, but these latter fell victim to Covid restrictions. In the end, however, the congregation as a whole got behind it. There was significant support from a few individuals as well as many generous gifts from a large proportion of the members and friends of the church. “We are most grateful, also, for grants from various charitable trusts, including Miss ME Swinton Paterson’s Charitable Trust and the Garfield Weston Foundation,” resumes Rev Janice, “and there was a small balance from the Heritage Lottery Fund grant, left over from the tower restoration, which we were authorised to put towards the lighting. Some members of the congregation also offered interest-free loans, to enable the works to go ahead. We are grateful for these, too, but I am pleased to report that the level of donations has been such that we are already in a position to repay these loans in their entirety.”

With the funding in place, the works were authorised to proceed and, by early September, had commenced. Peter Johnson says he cannot speak too highly of the professionalism of the chief installer, Brian Ward, and of his team. “There was some advantage to the church being closed, except for a limited number of services, by Covid restrictions,” he says, “as it enabled the team to work with less interruption than there would normally be. But I cannot overstress how accommodating Brian and his team were to our continuing use of the building, their respect for it, and their grasp of the peculiarities of working in a building of this type. They took the opportunity, while accessing the high up areas, of giving everything a thorough clean. A lot of these areas just cannot be reached without extensive scaffolding, so that’s 150-odd years of dust and spiders that have been removed in the process; an unexpected, but very welcome bonus.”

The work finished in mid-November, but the new lighting was, so far as possible, kept ‘under wraps’ until it could be showcased as part of the two Lucernarium services, held on 18 December. “At that point we were only allowed to use the building for church services,” Rev Janice explains, so we couldn’t just invite people in, or let them visit day to day as we would in normal times. Besides, we wanted to give due thanks to God, as we firmly believe that he has blessed this project and inspired so many people to contribute so generously. So, these Blessing of the Light services were an appropriate, as well as the only possible, way of giving thanks both to God and for the generous individuals and organisations who made it all possible.” The two services were held on the same day and were very well attended, given the prevailing restrictions on numbers. And everyone attending—including a few who said they had been sceptical about the project—agreed that the church looks stunning; the new lighting highlighting, as it does, the beautiful architectural features of the building—as well as making it possible to see what you’re doing. The effect was further enhanced by a beautiful Christmas tree in the entrance porch, kindly gifted by Dumfries Lions Club.

“Part of our undertaking to the National Lottery Heritage Fund, when they supported the repairs to the tower, completed in January, 2019,” adds David Kerr, “was to make the heritage element of this beautiful building more accessible to the general public. In normal times, the church is open pretty much 9am–5pm, sometimes more, seven days a week, for people to visit, and for personal reflection. This will resume, once regulations allow. We will have audio guides, interpretation boards and the like, to explain the features of the building and its history as a significant place of worship in Dumfries. The new lighting will enable people to wonder at the beauty of the building and what inspired its construction. A number of features are now visible which will never have been seen since the church was built some 150 years ago. A further bonus is that the old lighting, when fully operational, used the best part of 10kw when everything was on (and still working). The new scheme uses about a tenth of that, has practically a lifetime guarantee and will be very low maintenance; all contributing towards sustainability, as well as offering improved flexibility for the concerts and so on that we host for Music in Dumfries, Dumfries Choral, and so on. Other churches have already begun to show interest.” 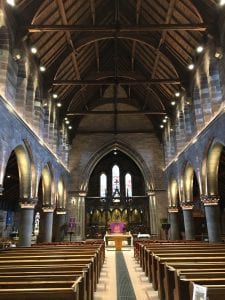 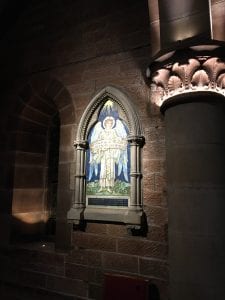 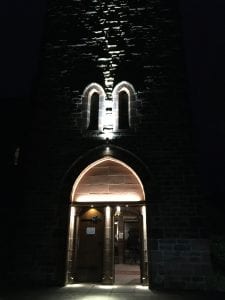 “It’s clear that those who planned and built the church in the first place, as well as those who have called it home ever since, put the very best of their available talents and resources into St John’s,” concludes the Rev Janice Aiton, “and I’m pleased that we have been able, under God, to maintain that tradition. We hope to have a formal service of blessing, both of the new lighting and of the newly repaired tower, with the Bishop in attendance, in the summer; but we do hope to be able to start welcoming visitors to our beautiful church as soon as regulations allow.”

Almost immediately after these two services were held, the country found itself in lockdown again. The church, in common with others, is now able to re-open on a limited basis and, from Palm Sunday (28 March) onwards, is offering a weekly Family Eucharist at 11am on a Sunday, a weekly more traditional Eucharist service at 10.30am on a Wednesday, as well as various online offerings (www.stjohnsdumfries.org), many of which have been running throughout lockdown. Anyone wishing to attend the Sunday or Wednesday services is asked to book on 07572 006290. From Tuesday, 13 April, the church will also be open, on a limited basis, for private prayer and contemplation (Tuesdays 2–4pm and Fridays 10am–12noon. In normal times, it is open more or less 9am–5pm, seven days a week): no need to book, though there are, of course, rules to be followed. St John’s is looking forward to making their rejuvenated building as welcoming to as many people as possible, as circumstances gradually allow. 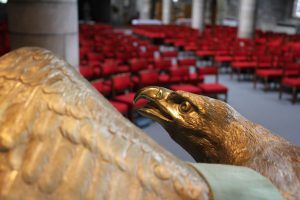 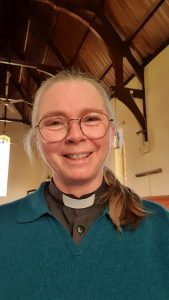