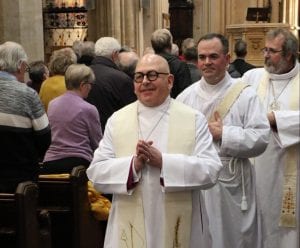 The Right Reverend Kevin Pearson became the 15th Bishop of the Diocese of Glasgow and Galloway, upon his translation from the Diocese of Argyll and The Isles in the Scottish Episcopal Church, on 1st July 2020.

On 18th January 2020, Bishop Kevin was elected Bishop of Glasgow and Galloway by the College of Bishops. His orders were translated to the Diocese on 1st July 2020 by letter, the planned enthronement on 4th July having been postponed due to restrictions imposed by the COVID-19 pandemic.

He is married to Dr Elspeth Atkinson who is Chief Operating Officer for the Roman Catholic Archdiocese of St Andrews & Edinburgh. Prior to that Elspeth was Director of MacMillan Cancer Support in Scotland, Northern Ireland and Wales and for most of her career held senior roles in Economic Development in Scotland.