In a conversation with our rector, the Rev Christopher Ketley, the recent obituary of George Floyd published in The Economist came up (The Life Pressed Out), and he asked me what I thought about the situation in the U.S. right now. As a U.S. citizen and a rather recent immigrant to Scotland (I’ve lived here a year and a half), I am simultaneously heart-sick, horrified, and hopeful. I would like to share with you some of my thoughts and direct you to the words and images of others more qualified than I am to speak on the endemic and unremitting racism in the United States of America.

What can you do? Here, in Scotland? You can pray. You can educate yourself. You can support those working for justice.

And may I suggest that instead of praying for peace, you pray for justice, for genuine transformation, and for the safety of those involved. Whilst I am deeply sorry about the situation in the U.S., I believe that these protests must happen. Pray for those who have lost their lives to the police and their families who are left bereft at the hands of the state. There are so many.

George Floyd is one. Breonna Taylor is another.

She was a paramedic in Louisville, Kentucky. She was killed by police while in her own bed. They entered on a “no-knock” warrant and she was shot eight times. The police were in the wrong house. She would have turned 27 on 5th June 2020. These are only two. Take the time to find out about those others (Ahmaud Arbery, Jamel Floyd, David McAtee, for instance).

In order to understand the police brutality and the protests, a little background is in order. The long legacy of genocide (against the indigenous people) and slavery has corrupted the structures of power and systems of justice in the United States. And it is far past time that those structures and systems must be transformed. For anyone reading this who is interested in the history of systemic racism in the U.S., here are a few resources. 13th is a documentary available on Netflix; for an insight into the experience of being Black in the U.S., read this piece by Neil deGrasse Tyson, a brilliant physicist “Reflections on the Color of My Skin”, and most profoundly, Between the World and Me by Ta-Nehisi Coates, a book written as a letter to his son. For those here struggling to understand the concept of white privilege (and there are plenty in the U.S. who cannot fathom it), I recommend “Seeing White” on Scene on Radio, a series of short 15-17-minute episodes, and “Unpacking the Invisible Knapsack” by Peggy McIntosh, a short essay. And I have just seen this Anti-Racist Starter Pack that has lots of resources to explore.

I think that all Christians must join the call for justice in the United States, even those of us not living there. Were Jesus among us in physical form right now, would He be clothed in Kevlar, helmeted, with gun, taser, tear gas, and pepper spray at the ready? Or would He be one among the crowd of people young and old, of all colours and creeds calling for justice? Here’s a powerful statement by Kai Nilsen, a Lutheran pastor in Ohio: “I used the phrase ‘Black Lives Matter’ in a social media post earlier this week. As happens each time I use the phrase, someone asks, ‘Why not just say “all lives matter?”’ Here is my quick response: When one of my four kids got hurt, it didn’t seem to make sense to say to them, ‘All my kids matter.’ In that moment, I embraced them and said, ‘You matter. Your pain matters. Your healing and return to health matters.’ That doesn’t diminish my love for my other kids. It expands my capacity to love as I live with another person’s pain. Jesus did the same thing in his ministry. He didn’t say, ‘all people matter.’ He went to those who were hurting, who’d been denied a place at the table, who had been cast out of community and said ‘You Matter.’ Samaritans matter. Women matter. Tax collectors matter. Lepers matter. Did that mean he loved other people less? By no means. His life and ministry expanded the vision and capacity of his followers to love as they broke down the religious and cultural walls that had long divided people.”

There are many ways to support those working for justice in the United States. And I don’t mean simply by making donations (though that is always helpful). The ACLU (American Civil Liberties Union) and the Southern Poverty Law Center have been doing good work for years. Black Lives Matter and the NAACP (National Association for the Advancement of Colored People) are at the forefront of the fight for equality. My personal resource is activist and former pastor Shaun King who has been instrumental in forming the Grassroots Law Project. My impotence and anger dissipated when I could sign the petition calling for accountability for the four police officers who killed George Floyd and when I made the calls to various police and city offices in Minneapolis. There are actions established to bring to justice those responsible for Breonna Taylor’s murder too. And many other ways you can help.

I am heart-sick. Three police officers kneeled on George Floyd—one on his legs, one on his chest, and one (Derek Chauvin) on his neck—as he lay on his belly handcuffed for nearly 9 minutes. As he was dying, he pleaded with them over and over to get off, finally calling out for his mother (who died two years ago) before dying himself. That plea for his mother in his last moments wrenches me from silence and complacency.

Watching the protests and riots unfold across the country, I am horrified. I have witnessed police in full riot gear who look like soldiers on a battlefield violently engage protestors. They have shot people with rubber bullets, tear-gassed them, sprayed pepper spray at people who are sitting on their own porches.

But I am hopeful. From the Sheriff in Michigan who took off his helmet and riot gear and spoke to the protestors, to the man in Washington D.C. who welcomed 70 protestors into his home as they were being attacked by police, and sheltered them overnight, I see Christ moving in America. In Ohio, mostly middle-aged white women locked arms to protect protestors of colour, and elsewhere calls for “white shield” brought white protestors to the front lines. When people of conscience come together like this it can only mean that good will triumph.
Finally, lest we think that these racial problems are confined to the United States, I would like to end with this screenshot from the Facebook page of the Diocese of St Andrews, Dunkeld and Dunblane. 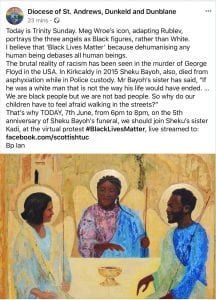 A recording of the virtual protest is available here – https://www.facebook.com/scottishtuc/videos/897821893963445 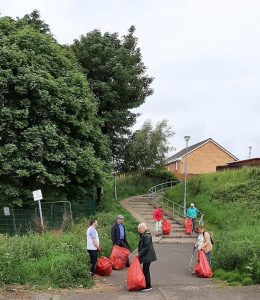