Our Diocesan Synod met earlier today, beginning with the Eucharist including Constitution of Synod and Chrism Mass. 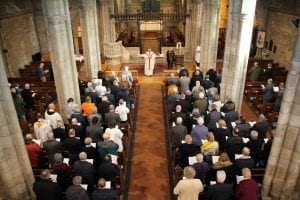 The meeting continued with the elections for the General Synod of the Scottish Episcopal Church.

⬤The Very Rev Kelvin Holdsworth was homologated as the clergy representative from the Glasgow North-East Region.
⬤The Rev Reuben Preston was elected for a full (4-year) term, the Rev Paul Singh for a partial (2-year) term at General Synod.
⬤The Rev Jonathan Livingstone, the Rev Matthew Little, the Rev Canon Oliver Brewer-Lennon and the Rev Sydney Maitland were elected for one year as alternate clergy representatives.

⬤The Synod continued with a talk from the Synod Clerk, the Rev Canon Gordon Fyfe, interpreting this year’s Diocesan schedule returns and statistics.
⬤The Diocesan Secretary, John Mitchell, presented the Protection of Vulnerable Groups report on behalf of Anne Jones, our Diocesan PVG Coordinator, with the importance of PVG work stressed by members of Synod and Bishop Mark.
⬤Graeme Nicholls from Graeme Nicholls Architects presented on the new diocesan centre.
⬤Miriam Weibye, Church Relations Officer for the Scottish Episcopal Church, spoke about the COP-26 Climate Change Conference in Glasgow later this year and the ways the Church is preparing to participate meaningfully.
⬤Bishop Mark announced this year’s Lent Appeal for Glasgow City Mission with Jack Geddes giving a presentation on the history and work of the charity.

The Synod then broke for lunch.

⬤ The Diocesan Treasurer, Bob Burgon, gave a presentation of the Annual Accounts and Auditor’s report, as well as the 2020 Budget.
⬤The Digital Missioner, Petko Marinov, encouraged the Diocese to “dare to fail” in order to continue to grow in faith, witness and outreach.
⬤The Diocesan Secretary then surprised Bishop Mark by displaying a series of photographs representing the wide and varied nature of his travels across our Diocese over the last 16 months, and by way of thanking him profusely for his thorough engagement with the Diocese during our Episcopal vacancy.

The day ended with the Confirmation of the Acts of Synod and the Blessing, with Bishop Mark using a litany written to acknowledge our love for the people of the Diocese of Argyll and The Isles as their Bishop will be enthroned as the 15th Bishop of Glasgow and Galloway later in the year.